I’ve read my fare share of Young Adult thrillers with various themes. Mysterious anonymous person spreading students’ secrets out in the open, blackmail, sex, secrets, secrets and so many secrets. I remember watching the movie Prom Night or maybe it was something else but a lot of killings happen during this special night and it was so fun. When I read about Prom House, I was definitely excited to read this story.

We follow a group of friends on their prom day, who had rented a house for their after party. Ten of them gather around, wishing for the best night of their high school lives but disaster strikes when one of their friends end up bloody dead and a storm keeps them all stuck inside with a killer.


The premise of Prom House is surely intriguing enough to hook the readers in. Told in first point POV, there isn’t a lot that we get to explore in this book. Our main character is wishing to finally have sex with her boyfriend and leave the town for her future. Then one of them ends up dead and she is navigating the night, trying to figure out the killer.

I did not particularly like the MC’s voice. It was too YA-esque and cliché at a lot of points. Her thoughts didn’t fit in with the situations at hand at times, whereby she’s more concerned about her dress and boyfriend than the dead body. As we don’t get POVs from the other characters, there isn’t a lot to say about them. They did seem very one dimensional and shallow and underdeveloped, in a sense that I as a reader didn’t get enough to actually connect with them, enough to feel sad for them. It was only on the surface and didn’t flow deep enough.

Moving on to the plot, the pacing did suffer. While there were a lot of high points, it quickly dwindled and went flat. The pacing kept fluctuating, whereby at some points I simply lost my patience and interest. There were moments of sexual indulgence that didn’t fit into the mood of the story and only felt highly inappropriate in the given situation. And I felt like they didn’t add anything to the story – at least the first time. I would have maybe loved to see more about the characters instead of this. Maybe about the friends and what the MC noticed about them, knew or view them.

I personally did enjoy the first half of the book. I was intrigued to know what was going on and how it would be resolved. The author’s writing was smooth and easy to grasp, flowing seamlessly into scenes. It was fast paced too, which is an added bonus.


Now, when reading thrillers, I’m usually looking forward to the climax and the reveals. I feel they are the best part that has the power to break or make the whole story. In Prom House, I don’t know if I can say that I liked this ending. Between three of my guesses for the climax, one of them was right! And this was also the one guess which I was least hoping for. Because I didn’t like it. I felt that the climax was rather poor and stupid, and utterly silly. The reasons didn’t hold enough stakes in the story, and I couldn’t relate, couldn’t feel for it.

Ultimately, though, Prom House was a quick read that didn’t entirely leave me satisfied. I loved the beginning and the middle, as well as the anticipation for the end, but it was the climax, the main reveal that left me a tad bit disappointed. I still think this had a lot of potential, and especially gave off an old thriller classic vibe.

Prom House will definitely appeal to beginners in the genre of thriller and readers who want fast, quick and fun who-dunnit thrillers. For me, this was definitely a fun ride nonetheless!

You can enter a giveaway to win a signed copy of Prom House on my Instagram.

ABOUT THE BOOK | Goodreads

When Kylie walks into the gorgeous beach house, it’s a dream come true. She still can’t believe she talked her parents into letting her spend the weekend down the shore with her boyfriend, Liam, after prom. Kylie, Liam, and their friends have rented the most amazing party house—and it’s all theirs. Prom was awesome, but this is going to be even better.

Except there’s a little problem. A violent storm hits the beach and the power goes out—with no sign that it’s coming back anytime soon. Roughing it with candles and camping lanterns isn’t the vibe they were going for, but everyone wants to make the most of it. Until people start disappearing . . . and turning up dead. Kylie is terrified. Is somebody’s prom date a killer?

She loves bad cover songs, good fight scenes, and every soapy YA drama Netflix can put in her queue. Chelsea lives in Texas, and has been known to say y’all.

Thank you MTMC tours for having me along and the publishers for a gifted copy of this book!

Hello everyone! It’s been a long time, hasn’t it now? Well, today I’ll be posting about a fantasy Rapunzel retelling – To Bleed a Crystal Bloom! Thanks to Turn the Page Tours for having me on the book your for this book!

END_OF_DOCUMENT_TOKEN_TO_BE_REPLACED

This year has been weird, I won’t lie. With the pandemic still not over here in India, and lockdowns and curfews just continuing, days have passed at home laying around. It’s given me a lot of time to read though. I just sit and read all day long, gobbling up books like a hungry monster. As a result, I’m nearing a hundred books on my goodreads reading challenge, which makes me so happy.

However, it’s not been the most exciting reading year so far, but I have surely read a lot of books that broadened my horizons. Books from different genres, different age group, and different cultures, and it’s been fascinating to read these books with differing voices, whether I liked them or not. I did have a lot of disappointing reads this year, but at the same time, there has been quite a few memorable and favorite reads too.

So, lets’ take a look at some of my favorite books of the year so far, in no particular order. While I did enjoy a lot more books, the following ten are those that I loved a bit more and feel are more unforgettable to me, books that I’ll keep recommending.

END_OF_DOCUMENT_TOKEN_TO_BE_REPLACED

Desi fantasies will never stop exciting me. When I found out about The Jasmine Throne, I will admit I had barely any idea about what the story was. I went into it blind and was very much surprised with what I got.

The Jasmine Throne is a desi fantasy set in a world of magic and politics and misogynistic, patriarchal leaders. In the midst of it all we have our two main leads – Priya and Malini, one a servants-maid and one a princess in exile. Along with them are a host of varied side characters who play major roles too. When Priya and Malini’s paths collide, they have to trust each other – despite being from the enemy lines – and help to save each other’s lives. What follows is a stunning tale of love, family, loyalty and strength.

END_OF_DOCUMENT_TOKEN_TO_BE_REPLACED 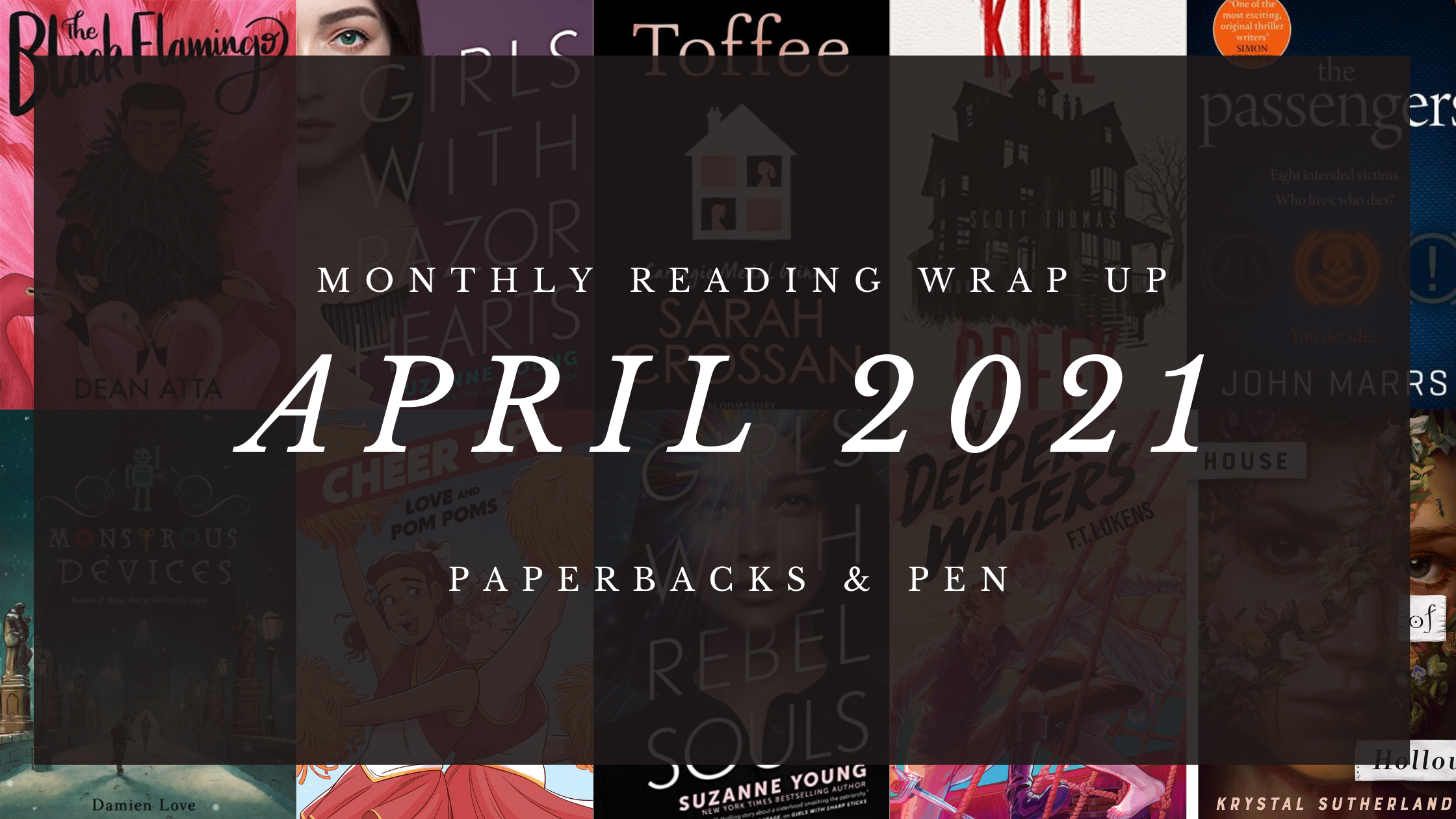 I don’t know about you all but April felt a bit too long, like it just went for way too long. I don’t know. It was a slow month for me. It wasn’t practically the best month – we are battling the horrific implications of the second wave in India, and then we also experienced a massive earthquake some mornings ago, followed by multiple aftershocks. Honestly, I’ve been going to sleep fearing for me and my family’s lives.

The saving grace was the Shadow and Bone show that released on the 23rd of April. It brought some semblance of normal and happiness into the otherwise dire and mundane days.
Despite these, I did manage to continue with my reading. If nothing, the books kept me sane and engaged throughout. I might not have had a great reading month but it was good enough. Managing to read fifteen, here’s a list of them all with mini reviews accompanying them.

END_OF_DOCUMENT_TOKEN_TO_BE_REPLACED

When I saw the cover reveal for Witches Steeped in Gold, I was very drawn. I mean, its natural for a reader to be attracted to a book by its cover, right? Surely, it was on my anticipated releases this year and I’m so glad I got to read it.

To explain WSIG in simple words, it is an enemies-to-allies story with betrayal, magic, black girl power and a hint of romance. But again, describing the book in these mere words would be utterly wrong, as the story is so much more and goes deep.

END_OF_DOCUMENT_TOKEN_TO_BE_REPLACED

A young prince must rely on a mysterious stranger to save him when he is kidnapped during his coming-of-age tour in this swoony adventure that is The Gentleman’s Guide to Vice and Virtue meets Pirates of the Caribbean.

An adventure set at the sea, with magic and romance, and the danger of warring kingdoms – sounds like the perfect mix for an exciting story. And that was, in simple words, what In Deeper Waters was. Set in a kingdom by the sea, journeying through the waters, and the towns near the banks, IDW follows Tal, a young prince on his coming-of-age tour, as he finds himself in the midst of a rouge kidnapping.

END_OF_DOCUMENT_TOKEN_TO_BE_REPLACED

Last year, I got lucky enough to read an early copy of Rent a Boyfriend. And then immediately fell in love with the story. A fake dating trope that takes the concept of renting boyfriend during holidays to keep nagging parents at bay (that rhymed, lol)? Exciting! And so was the book. So I slid into Gloria’s emails and asked for an interview because, like the curious soul I am, I wanted to know more behind the scenes of writing and the book.

And here is the very fun and AMAZING interview that I had with her. From writing and diverse rep to book and movie recs, I hope you enjoy it!

END_OF_DOCUMENT_TOKEN_TO_BE_REPLACED

It is very rarely that one gets to see a true desi term in a contemporary book title. When the cover revealed happened for American Betiya last year, I was sold. The theme sounded so good, the cover was stunning and the title was an immediate catch. I’m so grateful for Lonely Pages Book Tours for having me on the blog tour and giving me a chance to read an early copy of this book. American Betiya follows Rani and Oliver’s tumultuous romance as she grapples with identity, culture and what it means to love.

END_OF_DOCUMENT_TOKEN_TO_BE_REPLACED

I’ve always leaned a little towards the found family / friendship trope in stories, and Like Home called out to me with open arms.